I hope you’re all doing well this chilly week. I’ve got a few announcements:

As in previous years, we will have an informational meeting about the budget the Sunday prior to Annual Meeting. This year, the budget info meeting will be on 1/23 following worship. This Is a chance to get more detailed information about the budget and ask our Treasurer (Bob G) questions. The meeting will be in person, but we will have a Zoom option for people who would like to join the meeting virtually. I will email out a Zoom link to the budget info meeting next week.

Our Annual Meeting to approve the budget and elect board members and officers for 2022 is taking place on Sunday 1/30 after worship. Like the budget meeting, we will offer a Zoom option for those who aren’t able to join us in person. I will email out a Zoom link the week leading up to Annual Meeting.

Silver Lake, our UCC conference’s camp, is opening registration for summer camp on 1/15. I’ve attached their flyer, and there’s a discount code on there for registering early. More info about Silver Lake can be found on their website: https://www.silverlakect.org/

I wanted to share some lovely pictures from Christmas Eve. Sarah K used her photography talents to take some great pictures at our two services. I’ve attached a few. Thank you to Sarah for capturing these special moments!

ShawnaLee K also did a beautiful drawing of the 11pm service that I’ve attached for you all to see as well.

This coming Sunday, the gospel lesson is Jesus turning water into wine at the wedding at Cana. This is one of the most well known stories from the Bible, and it’s a story that’s had a lot of influence in the Church’s relationship with and understanding of alcohol. I wanted to share some of my favorite fun aspects of that history here that I don’t think will make it into the sermon.

In the 19th century, Congregational churches, and many other protestant churches, became very involved with the Temperance Movement, the movement to ban alcohol, and the story about Jesus turning water into wine became a real theological problem for people in the Temperance Movement: how do you square the good Lord Jesus turning perfectly good water into “demon alcohol”? Now, to be honest, the short answer is you cannot make this story about Jesus into an anti-alcohol story, but that did not stop people from trying very hard. My favorite tortured interpretive attempt involves people insisting Jesus turned water into grape juice, which involves a number of questionable interpretive and translation gymnastics.

Now, just as Jesus turning water into wine caused Temperance crusading protestants cognitive dissonance, so too did the church’s ancient practice of using wine for communion. In the early days of the Temperance movement, there was no way to keep grape juice from fermenting into wine, so some Christians opted to use water rather than wine. Water is used in baptism and Jesus changes water into wine, so it seemed close enough. There are some denominations that still use water for communion, and it comes from this involvement with the Temperance Movement. However, the majority of protestant denominations felt that water was a poor substitute, so people had to live with the cognitive dissonance around alcohol and communion for many years.

But, protestant America was  delivered in the late part of the 19th century from their wine based woes by the work of a Methodist dentist named Thomas Welch. Just like at our church, Thomas’s church had members take turns preparing and setting up for communion. During his volunteering with communion, Thomas had a revelation: he tried the new cutting edge pasteurization process on freshly pressed grape juice in the hopes that it would prevent the juice from fermenting into wine. He turned out to be right, and Thomas eventually launched a company, Welch’s Grape Juice, to provide juice for communion to all the churches desiring a substitute for wine. Grape juice was just the solution most of protestant America was waiting for, and many churches, including ours, shifted to offering grape juice instead of wine. Eventually, Welch’s realized there was a market for juice beyond the church setting, and the company is obviously still around today. So, the reason we have grape juice is because of the Temperance Movement and communion.

I hope you all have a good week.

Join us this Sunday!

Join us in person or online every week at 10 a.m. Services are in our sanctuary at 1242 Whittemore Road, Middlebury, CT; please use the main entrances on the street side.
Please visit our How We Worship page for more details.
Online worship is presented live on our YouTube channel, where you can also see an archive of previous services, sermons, and musical highlights.

Give in memoriam to our Book of Remembrance

Our “Multiplication Table” contributions of nonperishable foods for Greater Waterbury Interfaith Ministries (GWIM) are being collected in the bins outside the Church Office entrance during the pandemic. 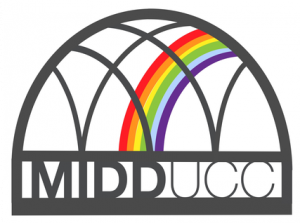 We’re in Connecticut, but Vermonters, you can get there from here: The home page of The Congregational Church of Middlebury, UCC.

The Preschool on the Green

For information on The Preschool on the Green, please visit their website: preschoolonthegreen.org